A classic swivel chair with a flexibly mounted backrest for better comfort.
Design: Burkhard Vogtherr
more
Diagon is a classic, extremely comfortable cantilever chair for conference and meeting areas. To match the Diagon swivel chairs, the backrest is available with a breathable mesh, elasticated woven bands, or in a fully upholstered version. Diagon's hallmark is its aluminium backrest adapters. They have integrated pendulum joints which ensure that the backrest comfortably yields when you lean back. With the optional stackable frame, the Diagon cantilever chair can be stacked in groups of five.
go to configurator

Montana is a thick leather for the discerning. The distinctive grain and full, soft touch characterize this high­quality semi­aniline leather. Thanks to a special mineral tanning process, Montana is highly func­tional and easy to care for.
Material
Priceclass
6B
Width, weight
Light­fastness
3
Abrasion resistance
3
Flammability 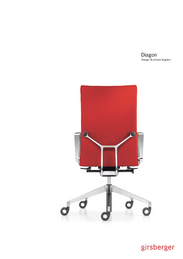