The flexible room divider.
Design: Carlos Tíscar
more
The Linked room divider range was specially developed to furnish connecting areas, meeting points and lounges in office environments. It comprises a series of individual components which can be put together in a number of different ways: a wide variety of base elements made of stainless steel tubing, fabric-covered wall elements in four sizes, plus a table and coat stand.
go to configurator

The wall elements are filled with either sound-insulating soft fibreboard or highly effective acoustic panels. The fabric covering also helps to insulate sound.

Born in 1964, Carlos Tíscar graduated in Industrial Design at the Escuela de Artes Aplicadas in Valencia and continued his studies at the Scuola Politecnica di Design in Milan.
more
Carlos Tíscar began his career in 1987 as a designer in the design team Factoría Diseño Industrial; in 1991, he became a member of the management board of Gesto Design. Since 1993 he has run his own studio in Valencia, which focuses on furniture design, and has won numerous design awards. Alongside his work as a designer, he regularly teaches at universities and colleges.

Where Linked excels: zoning and separating spaces, or combined with a privacy screen
Create privacy and absorb noise in open-plan offices
Linked can be used to flexibly and effortlessly partition spaces
As you like it: colour coordination or contrasts
The fabrics used to cover chairs and Linked can be coordinated
Linked is also perfect for waiting areas and lounges. The range also includes side tables 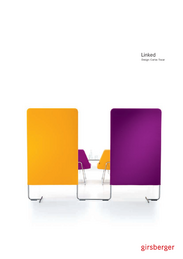